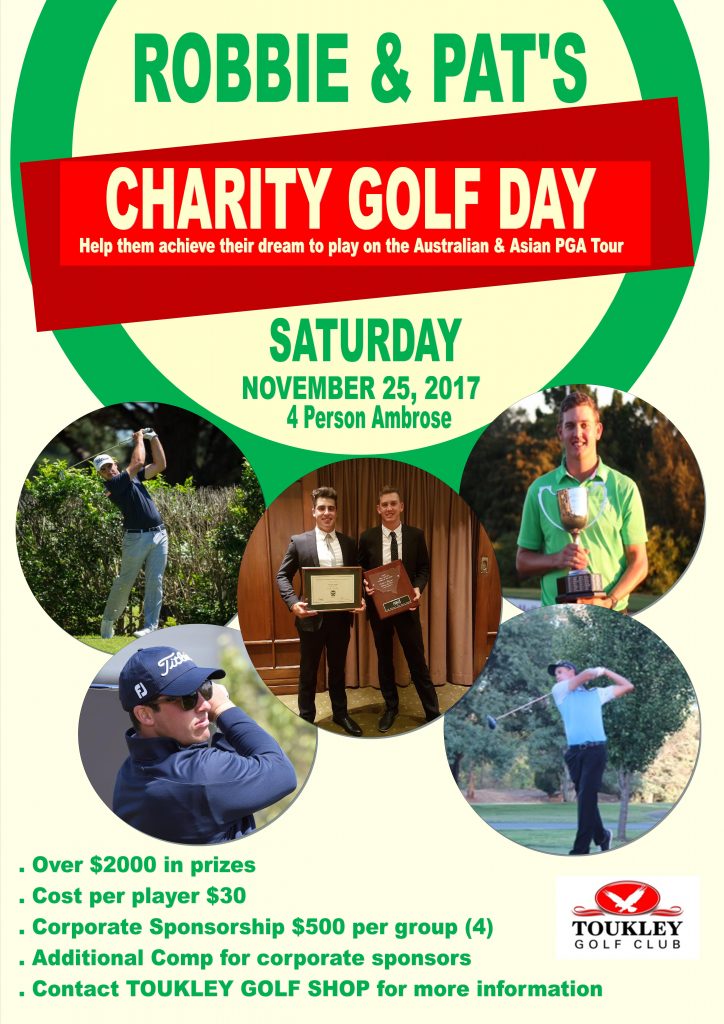 One of Toukley’s finest has had a busy schedule of late and it’s not slowing down anytime soon. Pat has been playing on the Ladbrokes Pro-Am circuit with some steady results that point to a golfer building to something special.
Most recently Pat has had a T10 at the Wyong Pro-Am then a T20 in a two day event at Castle Hill that boasted a large and quality star studded field.
This momentum saw Pat have a T6 at the Gunnedah Pro-Am which was won by former Toukley trainee Mitch Brown.
All this shows signs of some great golf ahead with Pat teeing it up in some major two day events over the next two weeks at Kooinda Waters 30th & 31st October, Magenta Shores 1st & 2nd November and Morisset 4th & 5th November.
If you love your golf take the time to get to the course and watch Pat in these great local events that bring some of Australia’s best talent to our doorstep…….and if you can’t make it just remember you can support Pat by taking part in his charity day on Saturday 25th November, details are on the site, in the club and pro shop.

2016 NSW Trainee of the year and third year Toukley trainee Robbie Hogan continues to impress by doing something trainee pros are not expected to do…….sharing the win at the Wyong Pro-Am with experienced pro Matthew Millar by shooting an incredible 64 (7 under par)
Robbie was paired with former Toukley junior and now professional golfer Jason Butt, the comfortable pairing saw Robbie breeze around the Wyong layout with always consistent ball striking and the putter working a treat.
The Wyong Pro-Am attracted a strong field with a total of five former Toukley juniors playing, exceptional Toukley professional Pat Joseph shooting one under 70 with Mitch Brown, Jason Butt and European touring pro Dimi Papadatos each shooting par 71’s.
This is clearly a sign under the tutelage of John Lewis and Trent Wieland the future of Toukley golf is very bright as all of these young pros have or still are being coached by them.

Robbie Hogan one of the favourites at the PGA National Futures:

Trainee professional golfers from around the globe have descended on the regional city of Ballarat for one of the most prestigious trainee events of the year. Toukley’s own Robbie Hogan with back to back wins in the QLD PGA Trainee Championship, a second in his title defense of the NSW PGA Trainee Championship and recent Wyong Pro-Am win is set to close his traineeship with another major title before moving onto the next stage of his career.
The tournament starts Tuesday 24th with the winner also gaining entry into 2018 PGA Championship, check his progress on http://www.pga.org.au/