Kaz is a fairly new and very welcome member of our Toukley Ladies Golf Club.  She has been brave enough to share her background with us so we can get to know a little more about her.  The following is her profile as supplied to me. 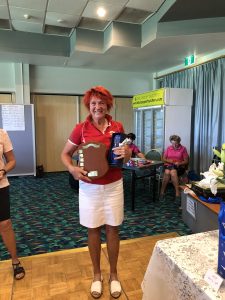 “Hi, my name is Kaz Coventry and I was born 4th September 1953, in Dandenong Victoria. We moved to NSW when I was 5 and already being a South Melbourne Swans fan the first rugby league team we saw were the St George Dragons,  a love affair that has continued ever since. Growing up in the Western Suburbs allowed us to go to the “footy regularly” and we enjoyed watching the mighty Dragons win many premierships (the glory days as I so fondly call them). Having completed High School I needed somewhere to live so decided to become a Nurse.  Back then you were trained in the hospital system. What fun it was working at the hospital with all those young doctors, we worked hard and played hard. I have 3 certificates in Nursing, a graduate diploma in Rehabilitation Counselling and many other varied work-related certificates. I was injured in a workplace accident so left the hospital and I work as a Practice Nurse in a variety of roles.

IN 1977 I was sick of working so decided to go travelling and did as many young Aussies do, went to Europe and did a Contiki Grand European holiday. What a blast that was! After the trip, I went back to work in London as a Nurse and a Bar Maid that indeed was too much fun. The next year I decided to go to South Africa overland and headed out on a 4-month odyssey in an ex-army truck. We initially went into Morocco but were thrown out and had to enter through another country down the road. The trip was often quite perilous and we were often in dangerous situations. I was almost sold for 9 camels. We were hijacked at gunpoint only to be let off when the hijacker’s found better things to shoot at. The game parks were amazing and I got to see Victoria Falls from the Zambian and Rhodesian sides. But one of the highlights was the thousands of pink flamingos, unbelievable.  We went into Uganda only to be told we have 24 hours to get out and believe me back then you do as you are told in Uganda. Having arrived safely but 20 kgs lighter in South Africa a friend and I hitch-hiked around South Africa and up to Rhodesia. That was amazing, hitched rides with the army, got invited to a rich polo family’s place and go to ride their horses. Camped up in Lake Kareeba and partied with Rhodesian soldiers, riding around the airport in tanks and on their horses. Even spent my 27th birthday being bombed literally by the Zambian army. Following Africa, I went back home and a few years later went skiing in some glorious places and once again had oodles of fun.

Years went by and I got married and had a beautiful daughter. Subsequently divorced and brought up Sarah with the help of my beloved grandmother. Seven years later I met Geoff and we were married in 2002. The testament to what a good stepdad Geoff was to Sarah, she asked him if I die can she continue to live with him. Of course, he said yes.  Sarah is a qualified Speech Pathologist and lives in Marrickville

In the following years, I purchased my beloved Secrets in 2003. This started a dream I had had all my life, to own and show a horse. We were very successful in halter classes winning many Supreme and Champion classes and came 3rd at the Royal Easter show (my most proud moment). Sarah would do the riding classes and Dressage. In 2012 I decided that I would become a dressage rider something I have wanted to do all my life. It was wonderful and on my first test, I had oodles of friends come to support me and afterwards we drank champagne. It was a magical day. Unfortunately, my dressage career was cut short when Secrets “broke down” and could no longer be ridden. To say that I was heartbroken is an understatement and I lost my sense of purpose. I am a person who has an animal, that animal stays with me for life. So now I have a big fat expensive horse that I adore with all my heart. In 2014 I went to the World Equestrian games another dream and saw my favourite horse in the whole world (besides Secrets) dance. I cried like a baby I was so overwhelmed and happy to see Valegro and the wonderful Charlotte Dujardin, it was truly a dream come true and I have the photos to prove it :0) 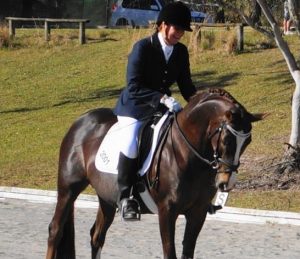 Geoff and I first travelled together in 2003 when we went on a Trafalgar tour of Italy. I was horrified on the first day thinking OMG what have I done, but it turned out to be the best holiday ever and started our love affair with Italy which we have been back to another 3 times also visiting some super countries.

In 2014 we adopted 2 rescue greyhounds and they have brought joy to our lives. To see them evolve from the skinny frightened animals to the most glorious loving dogs makes my heart sing. I have certainly learned what the word hounded means. They get so excited when I come home and cry with happiness lol just like me.

Without Secrets to ride and compete on, I was a lost soul (even with my dogs) I needed a purpose. So Geoff said why not play golf? I thought to myself kill me now, I had never considered playing, watching or reading about golf, and could not imagine myself doing it. Anyway as Geoff had supported me through all my showing career I thought why not I will give it a go. I did say though if I am going to play it’s not going to be “hit and giggle” I will want to play competition. A wry smile was on Geoff’s face at that moment. So I had lessons and in February 2017 I went to play my very first game of golf at Toukley Golf course. Well, it was as you can imagine for a first-time golfer till I got to the 8th hole. Unbelievably I hit it onto the green and then took 4 to get it into the hole. At that moment I was hooked (mind you, it has taken me a year to do it again). I am a competitive person by nature and now I realised that Golf would allow me to compete. Yeah. Geoff and I started playing competitions on the 30th April 2017. Unfortunately, Geoff injured his shoulder that required a shoulder replacement and so I had to play alone. That was very daunting and confronting to play with people I didn’t know as a beginner golfer. But everyone was fantastic and I have made some great friends.

I so love playing golf. I practice and want to get better. My handicap came down from 45 to 37 on the 31st January. I believe that just because I am only a 37 handicapper I can still be competitive and so I put my name down for Pennants. I may not get to play and that is ok but if they need me I am ready haha. My golf goal is to be in second Division before I am 65. Recently I played in the Wyong Shield and unbelievably won it (oh what a fluke) and you guessed it I did cry when I received my prize because I would never have imagined that I would actually win a tournament ( can I call it that) after only playing Golf for 10 months. My Dad told me he was so proud of me and I loved that. I am hooked.  I have more golf apparel than going out clothes and a friend said I was a golf gadget junkie and I must confess I am.

I love playing Golf, I love playing at Toukley, the staff at the Pro shop are super and all the people I have met have enriched my life. Yeah bring it on I am aiming to get into first division by 70 haha can I do it ?? Well I am going to have a “red hot go “

Thank you Kaz for sharing your story.  Any other takers?